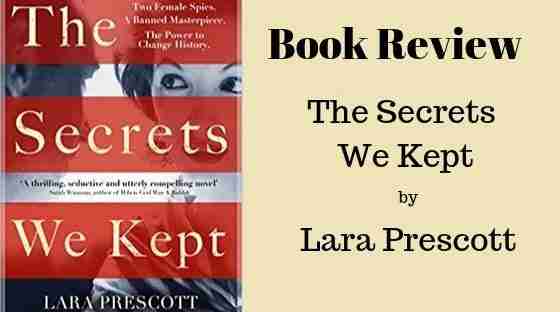 Disclosure: As an Amazon Associate I earn from qualifying purchases made through links on this site. This is at no extra cost to yourself.

Based on true events, The Secrets We Kept is set in the United States and Russia during the 1950s, at the height of the Cold War. It tells the story of Boris Pasternak and his banned masterpiece, Dr Zhivago and of attempts by the American intelligence services to smuggle the novel back into Russia. It is all part of a strategy to use literature as part of an ongoing propaganda campaign.

But behind the secrecy and the war of words are real human lives. In Moscow, Pasternak’s long-suffering mistress, Olga, faces the Gulag and an uncertain future. While in Washington we follow the lives of Sally and Irina, two female spies. Much of the action is observed through the eyes of the typing pool, a group of mostly university-educated women, who are denied more challenging work by virtue of their sex.

I was interested to hear Lara Prescott talking about her novel at a recent author event at Mr B’s Emporium in Bath. A former political consultant herself, she talked about the ways in which government use culture and words to influence ideas and feelings. As one of her characters says, “Back then, we believed books could be weapons – that literature could change the course of history”. But, as a member of the audience pointed out, the same methods are still being used today, even if the words have moved from the printed page to Twitter and other online platforms.

A central part of the book features the writing and publication of Dr Zhivago, whose plot owes much to the relationship between Boris Pasternak and Olga. Prescott said that this was one of her favourite novels (she was actually named after Pasternak’s heroine Lara…), but you don’t have to have read it to understand The Secrets We Kept. I haven’t read Dr Zhivago myself (although it is now on my reading list!), but that didn’t hinder my enjoyment of Prescott’s novel.

The typing pool was another important element of the story. The author said she was interested in gender politics, and in the way in which some women achieved a high profile during the War but were relegated to anonymity afterwards. This lack of individuality is shown through an unusual “collective narrative”, in which the typists speak with one voice: “we typed a hundred words a minute and never missed a syllable… our fingers flew across the keys… we’d pause only to answer the phone or to take a drag of a cigarette…”

Of course, that ability to remain anonymous is what made women good spies. Sally and Irina are prized for their ability to mask their thoughts and feelings, and to change identity as the job requires.

This novel poses some big questions: what motivates a spy, and are words the most powerful weapons we have? But what I enjoyed most was the way it encapsulates the world of the 1950s. This was a bleak time for everyone. In Russia books were banned and freedom of speech was suppressed. In the US women were objectified by men and prevented from reaching their full potential (even the female spies were carriers or decoys, never decision-makers). And paranoia reigned. Not just fear of the Soviet Union, the appearance of Sputnik prompting headlines like “Russia Wins” and “End Days?”. But, closer to home, we watch characters hiding their sexuality, dreading exposure, job loss and social ruin.

This is a story of secrets, both national and personal. A story to be savoured and reflected upon.

This post contains affiliate links, and I may be paid a small commission on anything you buy when you follow those links. This is at no extra cost to yourself.

This site uses Akismet to reduce spam. Learn how your comment data is processed.